Waarom Scrum contraproductief is
Posted by Christine at 11:14 AM No comments: 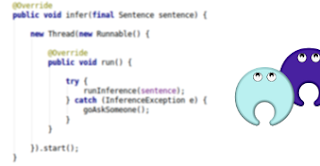 Posted by Christine at 6:02 AM No comments:

My cat. It's 18 years old, it's on a diet because of it's kidneys, on pills because of it's thyroid, it has dementia - although it's hard to know how much - and it misses it's twin brother who died a couple of months ago. When he doesn't eat his diet food, I sometimes mix it with the cheap food from the supermarket, which he still likes. It was 6.5 kg, now it's only half. He lost part of his sense of smell, doesn't see well, hearing is ok. It has trouble jumping onto my desk, more often than not grabbing my unsuspecting elbow and pulling itself up. If he doesn't sleep, he sits on the plus key of my keyboard.

The vet says he's not in pain. He loves it when I pick him up and walk around the house. He purrs when I stroke him. He lost sense of time so he settles on my bed whenever I walk into the bedroom.
His name is Pengo. We both mis his brother. 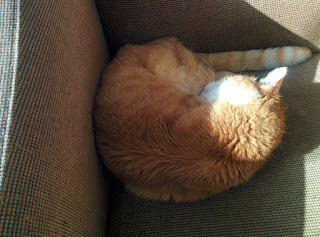 Posted by Christine at 12:26 PM No comments:

Solving Rubik's cube in just 20 moves: cube20.org
Posted by Christine at 6:05 AM No comments:

My cat Pengo sleeps in the kitchen sink.
Posted by Christine at 6:00 AM 1 comment:

Posted by Christine at 11:49 AM No comments:

I used to use Eclipse for software development. Last year, Google announced that for Android development, Eclipse is no longer supported, I have to use Android Studio. The following is a list of things that I like a lot in Eclipse that are missing in Android Studio. I did select the Eclipse-compatible key layout, to make things easier after coming from Eclipse.

Posted by Christine at 2:48 AM No comments:


Notre dernière rencontre avec Cabu en novembre... by lejdd
Posted by Christine at 5:16 AM No comments:

CABU : "Je ne respecte rien" by tv5mondelinvite
Posted by Christine at 5:15 AM No comments: 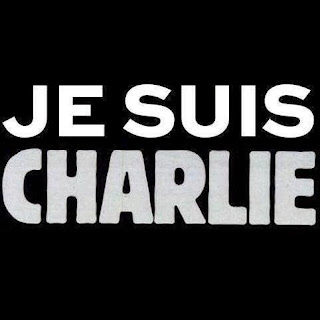 Posted by Christine at 3:35 PM No comments:

2CELLOS - Where The Streets Have No Name [Live at Exit Festival]

Posted by Christine at 7:47 AM No comments:

Posted by Christine at 3:04 PM No comments:

A software engineer one day has a brilliant idea for a new product. As she has some savings in the bank, she can afford to take a year off and work on the brilliant new product. After about six months, she publishes the app, and she decides that she needs more people to complete the whole set of software, web site and apps. Fortunately, she finds a VC fund that is willing to invest €3 million. Now she can incorporate the company, hire a couple of programmers, a sales person, and set up a proper set of servers in the cloud.

Two months after the closing of the investment deal, she receives a letter from the IRS. The letter states that as the VC fund invested €3 million for a stake of 30% in the company, our software engineer entrepreneur created a value of €7 million with her own shares at incorporation of the company. She now needs to pay income tax over €7 million. Of course, she does not have that money. Six months later she's declared bankrupt, she needs to leave the company, and the company without her is liquidated, at a substantial loss for all involved except the IRS. It takes her three years to get out of bankruptcy, as that's the legal term on which a personal bankruptcy should end with a clean slate.

Another software engineer, a close friend of our unfortunate first entrepreneur, decides to follow another path. He takes a year off, and on the first day incorporates a company to hold the intellectual property rights of the software he will be creating. That way, no value is "created" at the point where a VC fund invests.

After two months, our friend receives a letter from the IRS. As he's working as the sole proprietor of his corporation, in which he is creating value for the company, and as he has no other jobs, the company is required by law to pay him a salary of € 40,000 per year. Of course, the company doesn't actually need to do this, as long as it pays taxes as if it did. The entrepreneur needs to pay income tax for a fictional income of € 40k per year. This is not how our friend wants to spend his savings, so he calls the company he used to work for and gets his job back. He still has to pay two months of income tax from his savings.

Another friend, having seen all this, thinks she's smarter. She writes a letter to the IRS asking them how to go about if you start a tech company, you work 12 months for free, living off your savings, and how to avoid being taxed before the company makes revenues and the entrepreneur gets an income from the company. It takes two months for the IRS to reply: "we are not a consulting agency, we are the IRS. We tax companies and people, but we don't advise you on how to arrange your administration. We refer you to your tax consultant". After conversations with four different fiscal consultants, having received four different opinions on how the IRS will act, the entrepreneur gives up and tells her boss to please not pay attention to her resignation letter.

But there's a happy ending,
The fourth entrepreneur in this little group of friends now knows how to do it. He spends a year developing a prototype product, he incorporates his company with the help of a well known VC fund, he hires a sales person and five programmers, and he's very very happy. By the way, he lives in San Francisco now, where he moved when he left her job and started working for his own company.
Posted by Christine at 10:53 AM 1 comment:

I have an Android project where I retrieve instances from a database. These classes are not under control of Roboguice, so I have no injection. If I use Roboguice.getInjector(..) I need a context, that I can supply from a static referenced context that I define elsewhere. However, I want to test the same classes in Robolectric, I need a different context.

I decided to do the following.
I create a ContextProvider like so:

There is another way of achieving this: you can use Guice AssistedInject to re-create the instance after you retrieve it from a database. That works, but it's more code and less elegant than this.
Posted by Christine at 1:53 PM No comments:

The art of not so good design

I have a waste basket, with a lid. Cost three euro's, so what can you say. Still, someone has spent some time to design the thing, and, hopefully, test the prototypes. Or not. The lid hangs from the middle, it's bent so its center of gravity is below the hinges and it automatically shuts. Unless you throw something in, then the lid goes past its balance point and stays open.

I had rooted my Nexus 5, but the Android update before last made it lose root. I tried to reroot, but I ran into trouble because fastboot didn't recognize my device and the sdcard was not readable when trying to install from that.

I tried again today, this site (as before) proved very helpful.
I installed clockwordmod recovery again, then installed Clockworkmod SU via adb sideload (recovery said sdcard could not be accessed so I couldn't install from there). I used "adb sideload" rather than push the zip to the sdcard. Now the device has root again. In the mean time the device had upgraded to Android 4.4.4 but I don't think that mattered....

Btw, it turns out you can root a device even if it's encrypted. Or, that's what I did.
Posted by Christine at 6:21 AM No comments:

I have an interesting UI design issue. In a project in which we develop an Android app, we were discussing the behavior of the back button.

The app has tabs in the actionbar. The behavior of the back button currently is to leave the app, independent of the tab you have pressed. My idea on the back button is that it should take you back to the home tab, then when you press it again, you leave the app. If in one of the tabs you have pressed a button or a list item which brings you deeper into the app, the back behavior should be as follows: first press brings you to the default page of the tab you have selected, next press brings you to the default page in the home tab (or whichever tab is selected when you enter the app), third press makes you leave the app.

In another project, we had to different landing pages, depending on the preferences of the user. I made it so that the back button brings you back to the landing page that is in your preferences, or the landing page that you have selected when you entered the app. I feel that this is the most intuitive behavior of the back button, even if, as a developer said, the button is not stricly bringing you "back".
Posted by Christine at 4:39 AM No comments:

I wanted to root my Nexus 7, so I installed the right image and zip. But then the device didn't work any more. I think it's because the device was encrypted, and somehow after rebooting, the thing got stuck. I managed to get the right factory images from Google (I didn't backup the system, which you should always do), my defice is "flo" which is "razor". After I got the device back to a factory installation, rooting the device with clockworkmod was easy. Now I'll encrypt it again.
Posted by Christine at 3:31 AM No comments:

If you don't use Roboguice, you can use the default RobolectricTestRunner instead.
This is the annotations I have for my test classes:
This is the ShadowCaseSensitiveSQLiteCursor: (it's from here:http://stackoverflow.com/questions/11833150/robolectric-testing-with-ormlite so please give that post a credit)
Posted by Christine at 1:31 AM No comments:

My dad moved from Windows XP to Windows 8. Disaster. One thing Windows 8 doesn't seem to support is getting your old email (Outlook Express, from POP3) into your new mail program. Apparently, Windows users don't keep their email?

What I did to transfer his mail is the following.
I made a copy of the OutlookExpress mail file and put it on my computer. Evolution allows me to import it into a new mail box. Then I created an account on my dad's IMAP mail, and copied the mail from the import mailbox to his Inbox. Simple as that. Why can't Microsoft think of a way to keep your old email?
Posted by Christine at 9:26 AM No comments:

The art of bad design